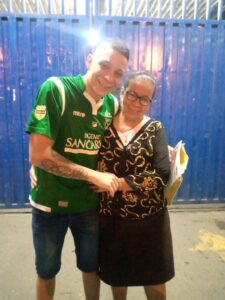 Christian Andres Aguilar was finally released from pretrial detention last Friday after spending 14 months in an overcrowded prison! He is one of six defendants from Paso del Aguante Resistance Point facing trumped up charges based on their participation in the 2021 National Strike in Cali, Colombia.

Christian’s release is long overdue. For more than a year, the Colombian judicial system has used pretrial detention and bogus charges to silence resistance emanating from the 2021 National Strike. Five other people from Paso del Aguante Resistance Point remain in pretrial detention despite maintaining their innocence.

The Colombia Freedom Collective struggles for the freedom of all political prisoners from the 2021 National Strike, and we have been working closely with the lawyers and community affected by the arrests of the Paso del Aguante 6.

The defendants from the Paso del Aguante 6 face up to fifty years in prison if found guilty, and your support for their liberation is more important than ever!

While we welcome Christian’s release, we reject his persecution at the hands of the state. We demand the charges to be dropped against him and the other defendants from the Paso del Aguante 6.

Posted on November 17, 2022 by ColombiaFreedomCollective. 0 comments

Please Make a Donation to Colombia Freedom Collective. Your Donation Is Tax-Deductible.